Principal Tater has the students compose a new school song.

With Adam, Dang, Mr. Tater, Mrs. Byrne as the judges, the students try to write a school song for Finnegan High. They perform the songs in front of the judges. When all the individual songs turn out to be bad, they all work together. In the end, a united school song emerged and everyone sang along. 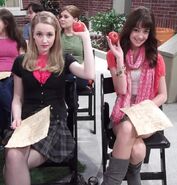 Add a photo to this gallery

Retrieved from "https://mryoung.fandom.com/wiki/Mr._School_Song?oldid=7687"
Community content is available under CC-BY-SA unless otherwise noted.