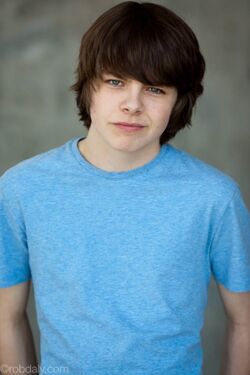 Brendan Meyer (born October 2, 1994), from Kitchener-Waterloo, Canada, is a Canadian teen actor who is best known for playing Adam Young in Mr. Young.

Meyer was born on October 2, 1994 in Kitchener-Waterloo, Canada. His career started in 2005 when he appeared in "Waking Up Wally: The Walter Gretzky Story" as a goalie. In 2006, he appeared in the Lifetime television movie "For the Love of a Child" where he portrayed the role of David. His big break came in 2007 when he was cast in the children's show, "Dinosapien" where he played Nelson Ort, a friend to the main character. He also appeared in the television show "Blood Ties" as Travis Deskin and the television movie "The Secret of the Nutcracker" as Frank in 2007.

The next year, he could be seen in "Freezer Burn: The Invasion of Laxdale" alongside comedian Tom Green and in the short film "A Pickle" where he played Kelly. In 2009, he could be seen in the Canadian television show "The Assistants" as Barry Collins and in the Lifetime movie "Christmas in Canaan" as the older version of Darien Provost character Bobby.

Retrieved from "https://mryoung.fandom.com/wiki/Brendan_Meyer?oldid=6503"
Community content is available under CC-BY-SA unless otherwise noted.